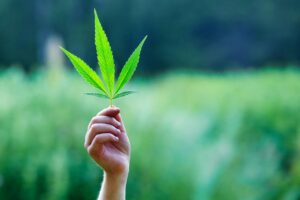 Delta 8 THC is the most abundant and popular alternative cannabinoid. These days, you can find Delta 8 THC almost anywhere in the United States, for a good reason. Delta 8 THC is considered very similar to marijuana but much milder. Delta 8 is commonly considered to be five times weaker than marijuana. Also, a Delta 8 gummy will take longer to kick in than most gummies.

I tried our 25mg Delta 8 gummies several times and really enjoyed them. I found that Delta 8 gave me an energizing high and energized me more than most marijuana gummies. Also, I felt pretty baked from one 25mg gummy. If Delta 8 was five times weaker than marijuana, it should have been comparable to a 5mg marijuana gummy. When I take a 5mg marijuana gummy, I feel almost nothing. Therefore, Delta 8 may be about half as strong as marijuana, not five times weaker. Finally, the gummy did take much longer to kick in. I felt like the peak was around 2 to 2 and a half hours, and I was high for a while. It did not have an intense peak but lasted long enough to savor.

Overall, I really liked Delta 8 THC. The high was comparable to marijuana, but I felt like it gave me more energy. With Delta 8, I wanted to move around and do something rather than sink into a couch. For someone looking for a fun, giggly, and energetic experience Delta 8 is a great option.

Delta 10 is one of the rarer alternative cannabinoids. Since it comes in minimal quantities, you seldom see exclusively Delta 10 products. If you do, it is probably too good to be true. Delta 10 is usually combined with other cannabinoids, commonly Delta 8, to create a large enough dose. Delta 10 is described as an energetic cannabinoid that is primarily a mind high. This means that if you take Delta 10, you will be sharp enough mentally to do some chores or play a complex game. Delta 10 is also considered as potent as Delta 8, so significantly weaker than marijuana.

I tried our Delta 10 + Delta 8 50mg gummies, and they took me for a ride. I expected the dose to be similar to about a 10mg marijuana gummy, but it was much more robust. I think it was nearly as strong as a 50mg marijuana gummy. Since I was energized by Delta 8, I figured this combo would make me even more energetic, but I felt very sedated. I had little urge to move around, and my body was completely relaxed. I felt like the gummy peaked about 90 minutes in and lasted longer than usual.

If you want a cannabinoid to send you to the moon, I recommend Delta 10. The combo between Delta 8 and Delta 10 made the high greater than the sum of its parts. Also, I did not feel like Delta 10 gave me an energetic high. I recommend Delta 10 to someone searching for a seriously psychoactive high.

HHC is a cannabinoid that is rapidly growing in popularity. HHC is considered stronger than Delta 8 and Delta 10, with about the same strength as marijuana. The general consensus on HHC is that it relaxes you like no other cannabinoid. HHC is also lauded for its anti-anxiety effects.

I have tried our HHC 25mg gummies and our HHC-infused flower. When I tried HHC, its relaxing high radiated throughout my entire body. Occasionally, I can get anxious or paranoid when I take other cannabinoids, but HHC always keeps me calm. I felt like HHC was stronger than Delta 8 and was comparable to similar doses of marijuana. Also, the infused HHC flower is super sticky and smooth to smoke.

Overall, HHC is my favorite cannabinoid. I love how I can take it when I need to destress, and I know that it will do the job. Gummies, flower, and vapes are all great ways to consume this cannabinoid. I agreed with the general consensus about HHC and found it to be a relaxing body high. If you need to destress or want to relax on the couch for a few hours, HHC is an excellent choice.

THC-O is known as the psychedelic cannabinoid due to its intense high. THC-O is considered stronger than marijuana and seriously stronger than Delta 8. The general consensus is the high from THC-O is euphoric, similar to a psychedelic like LSD or mushrooms. Also, THC-O has the strange property of taking a while to kick in, even when vaped or smoked.

I tried our THC-O vape cartridges. When I ripped the vape for the first time, I felt almost nothing, and it took about half an hour for me to feel high. Once I started feeling high, it was intense. It felt more intense than marijuana, and the high was quite different. The mind high felt focused, like I could become immersed in a TV show or a video game. The body high was much different than I expected; it felt invigorating, like my body was ready to go. The high lasted a little shorter than I was used to from other vape pens, without counting the 30 minutes it took for the high to start.

Overall, THC-O has earned the name the psychedelic cannabinoid. I would not call the high completely euphoric. Still, the unique high was something I had never experienced before in a cannabinoid. I can see how someone would feel euphoric with a larger dose of THC-O. I would recommend THC-O only for people with extensive experience with cannabinoids who are looking for a refreshing experience.

It can take some time to find your favorite cannabinoid, but I hope this list gives you a good place to start. Remember, everyone has unique experiences with each cannabinoid. Just because I found HHC relaxing does not mean you will, and you might feel the energetic high of Delta 10 even though I did not. The general consensus is a great place to start; most of the time, you will feel similar to what other people experience. Still, other times it can be quite different. When looking for your favorite cannabinoid, look at the general consensus first to see what the high is like, and then give it a few tries. Soon enough, you will find your favorite cannabinoid that you can enjoy forever.