How Were THC-P & HHC-P Discovered?

In 2019, a team of Italian scientists stumbled upon THC-P by accident. These scientists used advanced techniques, such as mass-spectroscopy, to closely analyze the plant. As they were observing the cannabis sample, they were shocked to find a cannabinoid that looked nothing like anything they had ever seen. This cannabinoid was THC-P.

HHC-P was discovered swiftly after THC-P. HHC is made from Delta 9 THC, using a process called hydrogenation. This process changes the Delta 9 THC chemical, adding two new hydrogen atoms to the molecule. Therefore, the jump from THC-P to HHC-P was simple, as scientists just had to hydrogenate THC-P. Now that scientists had discovered these two new cannabinoids, the next step was finding out what made these cannabinoids different.

How Are THC-P and HHC-P Different From Other Alternative Cannabinoids?

Overall, the science behind what makes THC-P different than THC is complicated. A quick explanation is that the part of THC that causes a high is even larger in THC-P, so theoretically THC-P could cause a more intense high than THC. This is also true of HHC-P. Therefore, scientists estimated that THC-P and HHC-P could be twice as potent as THC. As any good scientist knows, the only way to confirm your theories is to test them.

Firsthand Experience With THC-P and HHC-P

The discovery of THC-P and HHC-P caused a scramble to make them into commercially viable legal cannabinoid products. In the last few months, companies have finally started rolling out THC-P and HHC-P products. At FarmaBarn, our first shipment of these arrived in the past few weeks. After following the creation of these cannabinoid products for a while, I was extremely excited to try these products firsthand. 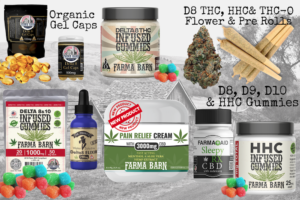 When trying THC-P, I was foremost interested in the strength of the psychoactive high. I had a THC-P pen and decided to take only one rip to start. Instantly, I felt an intense high wash over me. I had expected a strong high, so I wanted to see how it would develop. I found that THC-P was most intense at the start and slowly began to taper off. Usually, when I use a vape pen, I can feel the high instantly, but it gets more intense after a few minutes. Personally, I found that THC-P felt very similar to a high from marijuana and Delta 9 THC products. At first, I thought it might be twice as strong as THC, but it seemed to be about the same strength. If you are looking for a legal alternative to marijuana, THC-P gives you a similar experience but with a little more intensity at the start.

After trying THC-P, I tried the HHC-P the next day. HHC products are some of my favorites, so I was hoping to love HHC-P. Thankfully, HHC-P did not disappoint. HHC-P gave me a very focused high, along with relaxing vibes. Personally, THC-P made me want to sink into the couch, whereas HHC-P gave me an energy boost. HHC-P made me feel sharp enough to get some chores done around the house and energized enough to get outside with friends.

Overall, the difference between HHC-P and THC-P felt like the difference between an indica and a sativa. The instant intense high of THC-P felt like the couch-lock from an indica, and the focused high of HHC-P felt like a sativa. If you have an affinity for either of these strains, you will be at home with THC-P or HHC-P. Also, I was pumped to see if THC-P and HHC-P really had the strength they were rumored to have. Unfortunately, the theory that they are twice as strong as THC and HHC did not ring true. If you have tried THC or HHC products, THC-P and HHC-P feel almost identical in strength.

Now that you have learned about the discovery of THC-P and HHC-P, you should be well prepared to try these products. At FarmaBarn, we will be releasing these new products for sale very soon. For those of you who love trying alternative cannabinoids, you cannot miss out on THC-P and HHC-P. If you are new to trying cannabinoids, THC-P and HHC-P will make a great introduction to the classic high of THC.

Either way, you will feel euphoric when you try these cutting-edge cannabinoids from Farma Barn brands®.