There are countless cannabinoids that you can try today. From Delta 8 to HHCP-O, if you are looking for a new experience with cannabis, you have myriad options. All of these psychoactive cannabinoids promote different highs, some euphoric and others relaxing. Once you have experienced several cannabinoids, you may believe you have maximized their psychoactive properties. However, combining cannabinoids can enhance and change your high by utilizing the entourage effect.

An analogy for the entourage effect is going out for ice cream. When you go to an ice cream parlor, you have a litany of options for flavors. Some flavors are simple, like vanilla, and others are wild, like blueberry 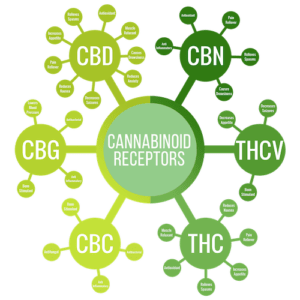 cheesecake. When you buy ice cream, you likely already have preferences for flavors. Perhaps you always get a single scoop of chocolate, or maybe there are a few flavors you pick from. You may be just fine with getting the same flavor every time you go, but some may desire more choices. If you have already tried every flavor the store has to offer, you may believe you are out of new options, but there are ways to make new flavors. The way to find brand new flavors is to combine a bunch of flavors into one. Instead of a scoop of vanilla or a scoop of cherry, you can get two scoops, one cherry and one vanilla, making the new flavor cherry-vanilla. This flavor may not be “better” than either by themselves, but you may personally enjoy the flavor more. True experimenters may try a triple scoop with a chocolate dunked waffle cone and sprinkles to create a wild taste sensation. The entourage effect works like combining scoops of ice cream to make new flavors. You can mix and match cannabinoids to create a unique psychoactive experience. If you have already fallen in love with a cannabinoid, you may not wish to try anything new. However, if you have tried many cannabinoids and are searching for a new psychoactive high, you can combine your favorites into a superb blend.

The beauty of isolated alternative cannabinoids is that they all target specific receptors in the brain. These endocannabinoid receptors are responsible for everything from the munchies to pain relief. If you have taken alternative cannabinoids before, you may note how each affects you differently. You may find that Delta 10 gives you an energetic high, whereas HHC gives you “couch-lock”. When you utilize the entourage effect, you might have a whole new psychoactive experience. Taking Delta 10 and HHC together may keep your body relaxed while giving you the energy to move around, or it may give you a whole new sensation. Also, your high may be more intense than you typically experience.

The entourage effect can also work to enhance the psychoactive power of alternative cannabinoids. For example, let us say that your usual dose of Delta 8 is 30mg and HHC is 20mg. You may want to cut both in half, 15mg of Delta 8 and 10mg of HHC, and believe you will get as high as you do when taking one alone. However, you may get significantly higher due to how your endocannabinoid receptors work. Instead of inundating specific receptors with one cannabinoid, multiple cannabinoids affect different receptors. The simultaneous stimulation of these receptors can work in concert to trigger a more intense high. Therefore, if you are experimenting with the entourage effect in search of a more intense high, you will not be disappointed. However, cannabinoids are not the only chemical catalysts in the entourage effect. Other natural chemicals like terpenes and flavonoids also play a significant part in the entourage effect.

Terpenes are aromatic chemicals, and flavonoids are flavor and texture chemicals. The smell and taste of cannabinoids may seem like a nuisance, but they are actually a key part of the entourage effect. These natural chemicals that exist alongside cannabinoids in the cannabis and hemp plants contribute to their psychoactive properties. One great example is the difference between cannabis sativa and cannabis indica. If you have tried marijuana before, you know that a sativa strain will give you an energetic mind-focused high, whereas an indica strain will relax your muscles and give you the munchies. Scientists believe the reason for these differences lies not in the cannabinoids but in the terpenes and flavonoids of the strains. Cannabis indica is abundant with the terpene Myrcene, which is known to increase relaxation and decrease anxiety. Cannabis sativa is rich in the terpene Limonene, which is related to alertness and energetic behavior. If these aromatic and flavor chemicals have such a dramatic impact on strains of marijuana, imagine how powerful they will be when combined with alternative cannabinoids.

To maximize the entourage effect, you should look at specific cannabinoids and means of ingestion. As I previously pointed out, CBD is a great cannabinoid to combine with others. CBD is not psychoactive but will intensify your high when used with another cannabinoid. I find that CBD promotes more relaxation, both in your body and in your mindset when used alongside another cannabinoid. Moreover, if you want to get even more terpenes and flavonoids, you may want to smoke infused flower. One of my favorite combinations is HHC and Delta 8 infused flower rolled into a joint. This gives me the familiar high of Delta 8 and the body high of HHC. After I am finished smoking, I will take a dropper of CBD. Although it makes the high more intense, I never feel overly anxious or paranoid. The terpenes from the smoke and the bevy of natural chemicals in CBD give me a pleasurable high that lets me chill. Everyone has their own personal favorites, so never be afraid to experiment for maximum effect. Hopefully, as you utilize the entourage effect, you will be able to find your perfect high.