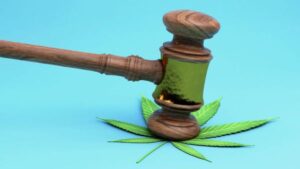 You may have seen bottles with the famous marijuana leaf at your local convenience stores. You may stare at these bottles and wonder, “how are they selling marijuana legally?” This simple question has a complex answer, but the answer is essential for those who want to purchase these new legal cannabis products.

It’s All About The Plant

The Hemp plant is almost identical to Cannabis Sativa but is missing a main component, THC. The naturally occurring chemical THC is responsible for the psychoactive effects of marijuana and is abundant in the Cannabis Sativa plant. On the other hand, the Hemp plant contains almost zero THC. The amount of THC in Hemp is regulated by the government, which requires Hemp plants to contain less than 0.3 percent THC. This may seem like a slight difference, but it is why there are legal cannabis products in states where marijuana is illegal.

The Legalization of Hemp

In 2018, the federal government passed the Farm Bill. The Farm Bill was a sweeping piece of legislation that affected many parts of the agricultural industry. The central part we are interested in is that the 2018 Farm Bill made the Hemp plant federally legal. This means that Hemp was now legal to grow and sell in every state across the country.

The Hemp plant can be made into various products such as rope, textiles, paper, and even food. The wide range of uses of the Hemp plant made it necessary to distinguish it from Cannabis Sativa, which is not currently federally legal. Along with these practical uses, many farmers and producers sought to tap into the health benefits of the Hemp plant. This resulted in the first of many federally legal cannabis products, CBD, becoming available to the masses.

CBD is a natural chemical compound found in the Hemp plant. CBD is known for its positive health benefits and has become widely popular. Usually taken in pill or liquid form, CBD can help with everything from aches and pains to getting a good night’s sleep. Unlike its chemical counterpart THC, CBD is not a psychoactive chemical and will cause a high. Due to its benign nature, CBD does not face many state restrictions and is legal in most forms across the United States.

What Is A Cannabinoid?

The legal status of Hemp has caused an explosion of new alternative cannabinoid products coming to market. Where several years ago it would have been challenging to find products that exclusively contained Delta 8 THC or HHC, they are now widely available. Along with the market explosion of alternative cannabinoids has come increased scrutiny and a complex legal status.

Alternative Cannabinoid Legality: The States vs The Federal Government

What You Need To Know Before You Buy Alternative Cannabinoids

Moreover, there is also an interesting legal status for online sales. We claim that we can legally ship any of our products to any state, which is true. Even states with “restricted” status for alternative cannabinoids can purchase our products legally. Online sales are legal due to inter-state commerce. The federal government controls inter-state commerce, and because the federal government considers alternative cannabinoids legal products, they can be legally shipped anywhere in the United States.

The complex legal status of these alternative cannabinoids leads to some legal oddities. Many states consider marijuana illegal due to the psychoactive properties of THC. However, you can legally buy THC (also known as Delta 9 THC) that has been extracted from the Hemp plant in a state where marijuana is illegal. This odd double standard is undoubtedly strange but is totally legal.